November is National Novel Writing Month, otherwise known as “NaNoWriMo.” National Novel Writing Month began in 1999 with a challenge: to write 50,000 words of a novel in thirty days. Since then, over three million people have completed the challenge. Of the thousands of people that set out to complete this challenge last month, four of them were part of our TDS middle school! 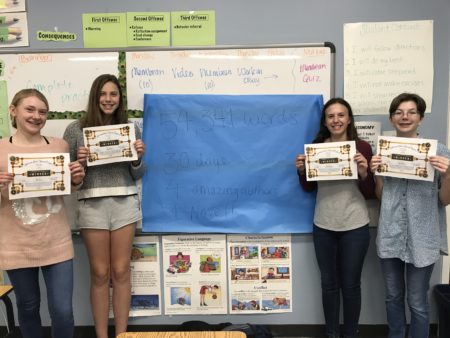 Three of our 8th-grade students and one 7th-grade student collaborated on a novel together. This novel, Cloud Nine, is a dystopian fantasy novel that they began plotting during the middle school Creative Writing elective. The novel features four narrators, each one written by a different student.

Over the course of November, these four students wrote 54,341 words! However, they’re not done yet. Even though NaNoWriMo is officially over, they’ve already set new word count goals for December and are excited to finish the novel.

I’m so proud of these students and the hard work they put in to reach their goals!